We’ve gone about another 2 pi radians around the sun again, which means it must be time for P.I.HUNT again! This year is the 22nd year of the century, and the 7th P.I.HUNT, which means that my average time for hunt production this century will be 22/7 by the end of this year, the common approximation for pi! 🙂 This is definitely a natural statistic to look at and not contrived at all to make this year’s Pi Day seem special like I do every year. If that’s not special enough, there’s something else interesting that happened this year (in some time zones, at least.) There were two notable occurrences today, as close as is possible for them to occur without overlapping. Namely, Pi Minute (which has the first 6 digits of pi), is 3/14, 1:59 AM, and Daylight Savings Time begins 3/14, 2:00 AM.

About this year’s hunt: I was feeling very demotivated about writing hunt puzzles at one point during the year, and I was thinking about cancelling the hunt. But I ended up deciding not to cancel it, and take the pieces of puzzles I had written and combine it into a full hunt. Something I notice myself doing sometimes is trying to raise the bar for myself over and over, until it gets to a point where I can’t pass over it anymore, and I think this is a good thing to notice when it’s happening and relax my expectations. (More specifically, I really am happy with how P.I. 4 and P.I. 5 turned out, so if you haven’t seen those you might also want to check them out!) As a result of this, the puzzles ended up a little scattered in some places in terms of varying in scale or difficulty level. Overall, I’m quite happy I ended up finishing this hunt, and I still think I made something I can be proud of. 🙂

The theme of the hunt is very vaguely Scooby-Doo themed (basically that’s just the theme of the meta.) There are 8 puzzles this year, and a meta. I’ll send the meta once you have solved at least 5 of the puzzles. Email me at jack[dot]l[dot]lance[at]gmail[dot]com to confirm your answers, or for other comments/hint-requests/questions.

There have been a lot of changes since I turned 22. I both started and stopped working at Google since then! Here’s a puzzle themed around 23 and change:

You can make 5 moves, and each move consists of picking a contiguous group with 1 nickel and 2 pennies, and moving that group, without rotation, to a new spot.

It’s been a while since the last time I posted pen-and-paper logic puzzles.

Here’s a set of puzzles inspired by TheGreatEscaper’s The Witless:

It’s Pi Day again, and what a nice looking pi date it is. 3/14/20 has every digit from 0 to 4 exactly once, meaning it can represent a permutation. If only there was a nice Greek letter that we could use to denote a permutation. 🙂

It feels like a good time to be running a completely not-in-person online-only event. If other events you were planning to go to have cancelled, or you are planning to being inside for a while, hopefully this hunt can provide some amusement.

That being said, this year’s P.I.HUNT is not going to be as big as the last few years. (P.S. This isn’t a bluff where there’s secretly a second round of puzzles after you get through the first set. I did legitimately make less puzzles this year.) After last year, many people sent me advice (which also just so happened to be the final meta answer) about what to do if I’ve been working too much with not enough play, so this year I decided to scope down & not work too hard. I was hoping to make 6 puzzles for P.I.6, but I guess I took it too easy, and only managed to finish 5. Hopefully this won’t affect things too much and you’ll still be able to figure out most of the meta without the 6th puzzle.

If you did 2019’s MIT Mystery Hunt, you’ll remember it was about combining various pairs of holidays. There was even a Pi Day Town! If it were up to me, Pi Day Town would have been in the center and connected to everything else, so I decided to take things into my own hands and do a Halloween/Pi Day mash up this year. The puzzles are themed around various fears, and once you solve the puzzles, you’ll be able to determine “What is my biggest fear?” (You won’t need any additional info for the meta. You can contact me to confirm answers if you want (jack dot l dot lance at gmail dot com) but there’s nothing to unlock.)

Is it Valentine’s Day already? We’re getting EXTRA CLOSE TO NEW PI. There’s only a month until the 6th P.I. Hunt!
Solve the anagram to learn what you should do to prepare:

Last year I posted a puzzle about measuring alcohol, and each even year has been a harder version of the same type as the odd year, so be warned for a very difficult liquid and cup puzzle!

I’ve graduated college now, and moved to a job, which means I can finally afford two cups. You’re now given 2 cups, both perfect cubes made of glass of negligible thickness with a volume of 22 units of alcohol. That’s way too much for me! Your goal is to measure exactly 1 unit for me.

You’re also supplied with a tap, that acts as an infinite source. Assume that the cups are see through, so you can fill one cup to the height of the other. Also if you rotate a cube to some angle, you are able to hold it still at that angle if you want. You don’t have a marker and can’t make any markings on the cups.

Good luck! Next time will be less mathy probably, but you’ll have to wait another year for it.

Hello! Last year was the 30th anniversary of Pi Day, which makes this year the 31st. That’s got the first two digits of pi, rather than just the first one, and so is even more of a milestone and clearly not just me making up reasons to call every Pi Day special. (I’m not the only one…) I may have gone a little insane making the puzzles this year, I’m sure my mental state wasn’t too affected though. I can’t wait for you all to see what I’ve been working on during the past year.

There are 14 non-meta puzzles, all of which start off unlocked and are linked below. I’ll send the first meta once you get at least 4 answers that go to it, and it will answer the question “What should Jack do if he’s gone crazy from work?” and the second meta once that’s solved and you get at least 4 answers for it, which will answer the question “Now that Jack’s followed your advice, rather than dull, how is he feeling?” (I will let you know which puzzles go to which metas when you unlock them)

Email me at jack[dot]l[dot]lance[at]gmail[dot]com to confirm your answers. You can also email if you get stuck and want hints, or just any comments, errata, or questions. Also, feel free to work individually or as a team, and solve now or anytime after now.

Decompose the pi shaped grid into the twelve pentominos, allowing both rotation and reflection.

If you haven’t seen before, I post an age-themed puzzle each year (Here’s last years). 21 is drinking age (in US), so I have a drinking related puzzle for you.

Normally in these sorts of puzzles, you have an unlimited amount of liquid, and 2 or 3 cups, but like all college students, I’m too frugal to give you all that! In this puzzle, there’s only 1 cup.

The cup is a cube, measuring 10 units in width, length, and height, and which also has a vertical dividing wall that goes halfway up cutting it in half. I’ve attached a diagram to make it more clear, along with a front and top view.

You are given the cup and a straw, and the cup begins filled to the brim with beer. Besides the beer that comes in the cup, you aren’t given any extra (or any source to keep beer you’ve poured out.) Your goal is to drink exactly 21 cubed units of beer. 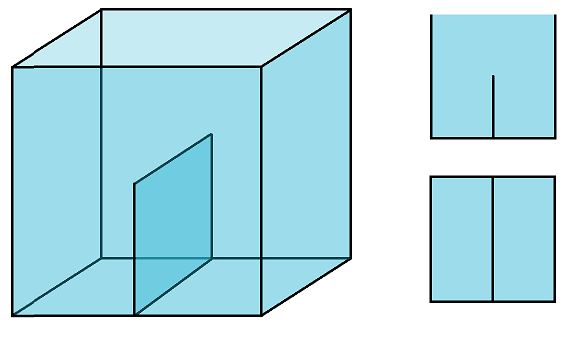 Hi!
This blog ideally has 5 puzzles which all belong to some theme, every other week, although, this won't always be true. The first puzzles I post each week are called Monday and they go to Friday, regardless of the day I actually post them. The day ratings also reflect the puzzles' difficulties. The first block of text in each post will be the only necessary information to solve the puzzle, just like the first block of text of this read-me is the only necessary information to use this blog, so feel free to skip the rest of my posts/read-me if you want to.

So, about me: I am a student from USA, and I've liked making and solving puzzles for the past 3 or 4 years. I also like math a ton. Other interests of mine are linguistics and puns! Okay, that's enough for now.

Oh, and you can e-mail me at jack[dot]l[dot]lance[at]gmail[dot]com